Writing instrument pays tribute to one of the most iconic and influential leading women of the 20th century who moved audiences with her on-screen performances and iconic style, and inspired many with her off-screen activism.

Montblanc Muses pairs the Maison’s deep heritage of writing culture with the stories of strong and fearless women who have left their mark on the world. Actress and activist Elizabeth Taylor (1932 -2011) is the latest “muse” to be celebrated with a special edition writing instrument, having invented modern-day celebrity and  being widely regarded as one of the most iconic and influential women of the 20th century. Known for her independent spirit, remarkable beauty, and unwavering compassion, she inspired generations both on and off screen. Whether acting in films as the quintessential leading lady in movies like Cleopatra and Cat on a Hot Tin Roof, forcing the world to recognize the AIDS pandemic, growing her monumental fragrance business, or dominating media headlines with her incredible romances and dramatic private life, she always lived by her own rules and she did it all with confidence and grace. 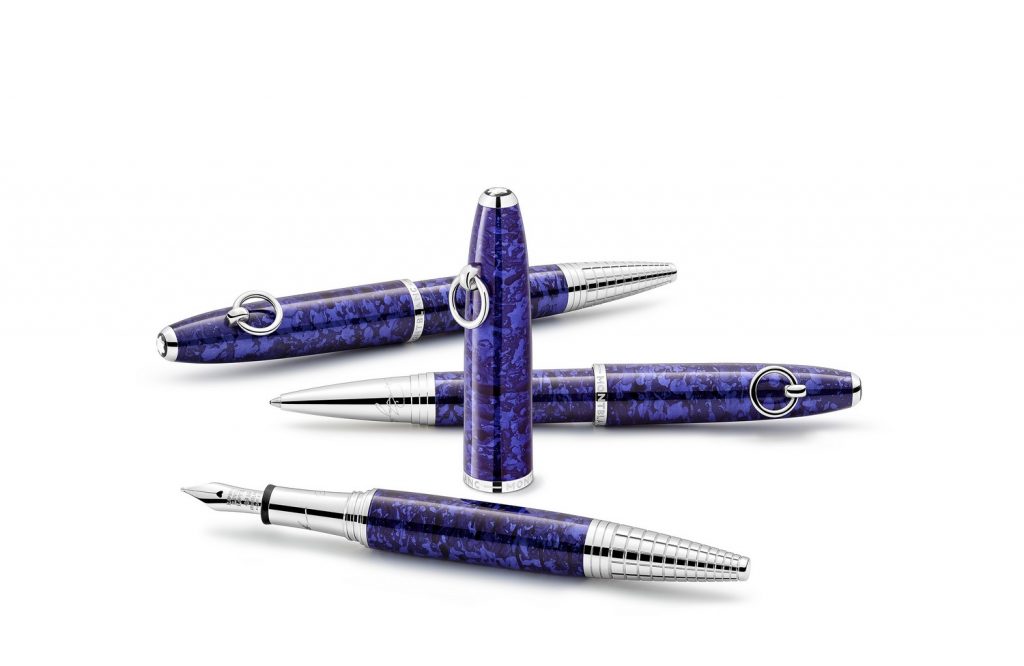 The overall design of the new Montblanc Muses Elizabeth Taylor Special Edition is inspired by the aesthetics of the 1950s and 1960s, the period in which Elizabeth reached her acting zenith in Hollywood. The shape evokes an original Montblanc writing instrument from this same period. Achieved using a special lacquering technique, the cap and barrel are covered with a dark-violet marbleised lacquer in homage to Elizabeth Taylor’s stunning eyes, and the star’s favourite colour. 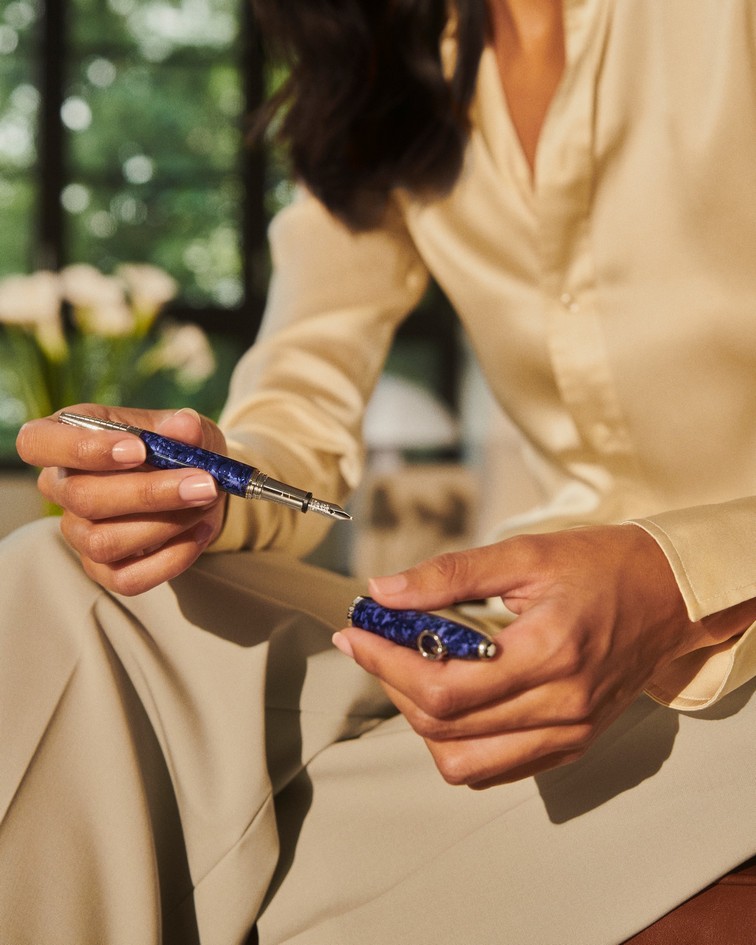 A style icon with luxurious tastes, Elizabeth Taylor loved diamonds and precious gemstones, fascinated by their beauty and perfection. Her personal collection of jewels, selected with expertise and dedication, was among the most important private jewellery collections in the world featuring historic pieces including the gigantic 33.19 carat Elizabeth Taylor Diamond (formerly known as the Krupp Diamond) ring, given to her by Richard Burton. Elizabeth Taylor’s passion for jewellery serves as inspiration for the ring-shaped clip that draws attention with its unusual shape, while the platinum-coated cone with its geometric engraving recalls a typical jewellery pattern of the 1950s.

Perhaps this 20th century muse’s most enduring legacy was her trailblazing humanitarianism, shifting the spotlight that had been on her since childhood to causes that needed attention.  In the 1980s, she leveraged her celebrity to urgently advocate for research, treatment and support of people living with HIV/AIDS, who were becoming increasingly marginalised. Her conviction and courage at a time when the government and the general public were taking no action are still admired today. In 1985, Elizabeth Taylor co-founded the American Foundation for AIDS Research (amfAR), now The Foundation for AIDS Research. In 1991, she established 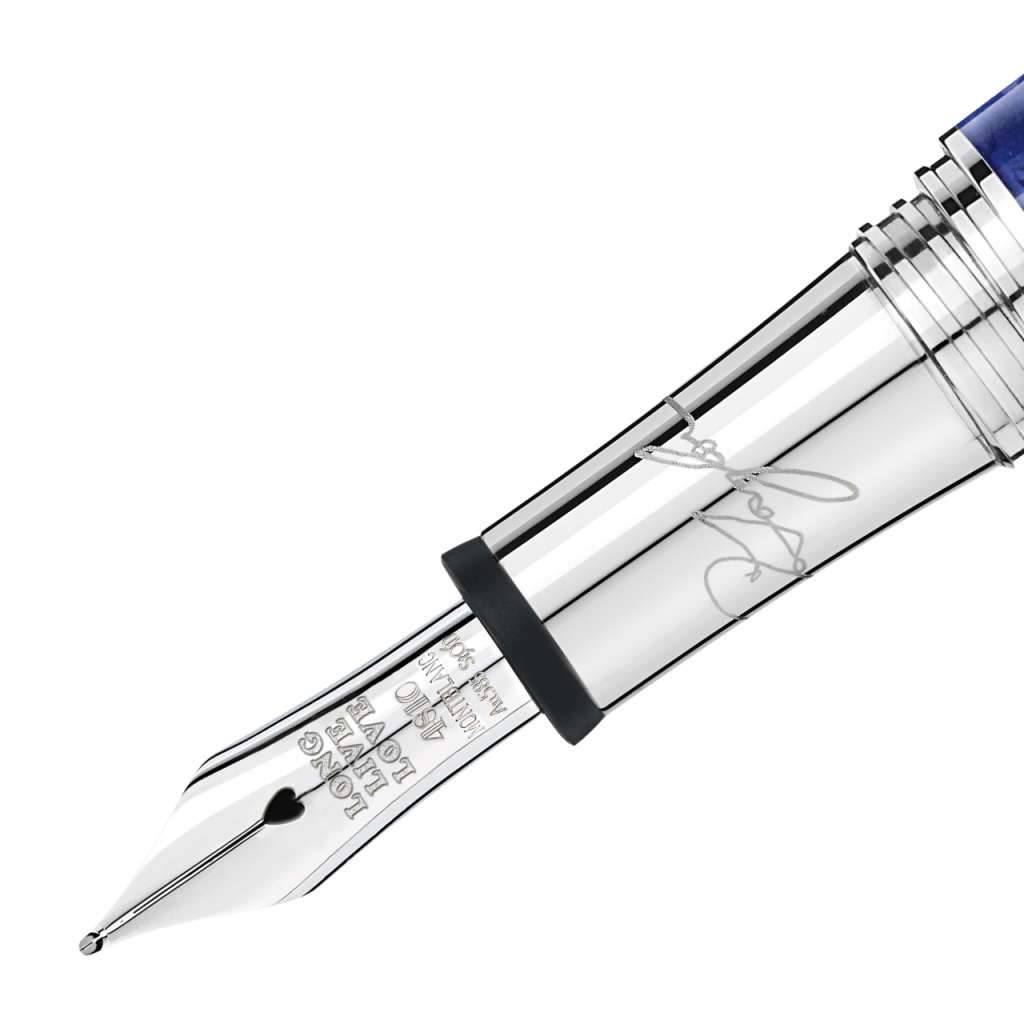 The Elizabeth Taylor AIDS Foundation (ETAF), raising more awareness for the fight against AIDS than any other public figure of her time. In remembrance of her moving speech at the GLAAD Media Awards in 2000, which ended with the words “LONG LIVE LOVE”, the fountain pen’s Au 585 solid gold rhodium-coated nib bears an engraving of these three words.

Available as a Fountain Pen, Rollerball Pen and Ballpoint Pen, the Montblanc Muses Elizabeth Taylor Special Edition is a glamorous and meaningful tribute to a woman who always lived her life with passion, and made an important contribution to entertainment, culture, fashion and philanthropy.