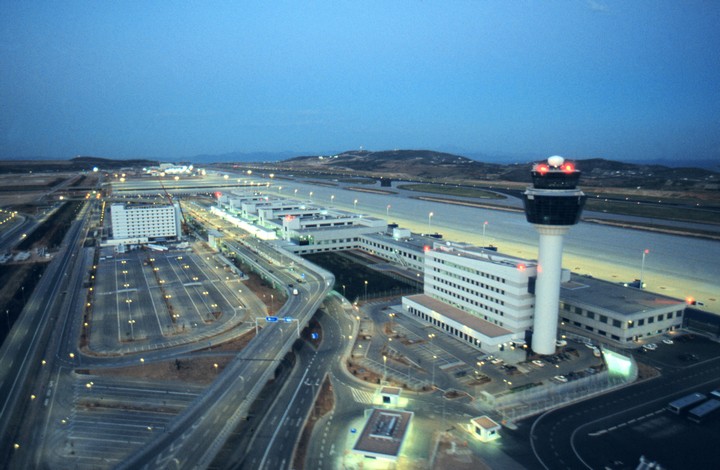 On March 28th, the Athens International Airport “Eleftherios Venizelos” completed its first 15 years of operations, and after a year of records (2015), the most successful year for the airport’s passenger traffic, with 18.1 million passengers, heads to a very promising future.

From the beginning until today…

July 1996. After several delays, works start on the construction of the new airport at Spata, which will replace the Hellinikon International Airport, serving Athens for 60 years and could no longer meet increasing passenger demands of the future. Two months later, on September 5th, the then Prime Minister Costas Simitis performed the foundation ceremony. The new airport was baptized with the name of Eleftherios Venizelos in honor of the Greek politician, who, as Prime Minister, he founded the Air Ministry and made systematic efforts to organize the Civil Aviation. In an extremely short period of time and 5 months (!) ahead of schedule, works are completed and the new airport is ready to operate.

On March 27, 2001 the official opening is attended by vips and covered by the media. The next day, on March 28 at 14:59, the first flight 424 of Olympic Airways from Montreal is landing, marking the official start of the airport’s operation and the following morning at 06:00, Eleftherios Venizelos goes into full operation with the first departure, flight 1572 of KLM to Amsterdam, suspending all commercial flights from the old Hellinikon Airport.

From that moment on, “Eleftherios Venizelos” takes off! It is ranked among the top airports in the world in the first year of operation and moves up to the 2nd position in Europe and the 3rd in the world in the airport size category up to 15 million passengers per annum, according to the annual results of IATA’s independent survey “Global Airport Monitor” and the following year moves up to the 1st position in the world. Since then a great number of awards are on the way.

2004, the year of the Olympic Games in Athens, equally important for the AIA, who, after bidding farewell to Olympic Flame, welcomes with enthusiasm the triumphant European Champion 2004, Greek National Football Team, as well as more than 2,800 members of the Olympic Family and 35 heads of state, arriving in Athens for the Opening Ceremony of the Olympic Games, as well as and the Paralympic Family. A record year too, while the opening of IKEA store Airport (25,500 m²) marks the completion of the first major project in Airport Commerce Park.

In December 2006, marking 5 years of operation, the airport of Athens joins the “family” of Europe’s largest airports, exceeding 15 million passengers, while the UEFA Champions League final between Liverpool and AC Milan on Wednesday 23 May 2007 rushes the adrenaline and the numbers soar! Winners of the night, the Italians and the airport’s human resources, that managed efficiently 85,000 passengers (25% more passengers handled in one day, breaking the previous record of the Olympic Games). 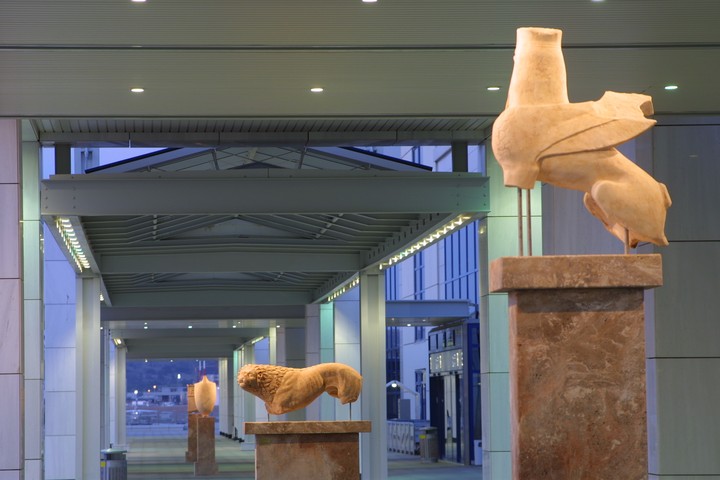 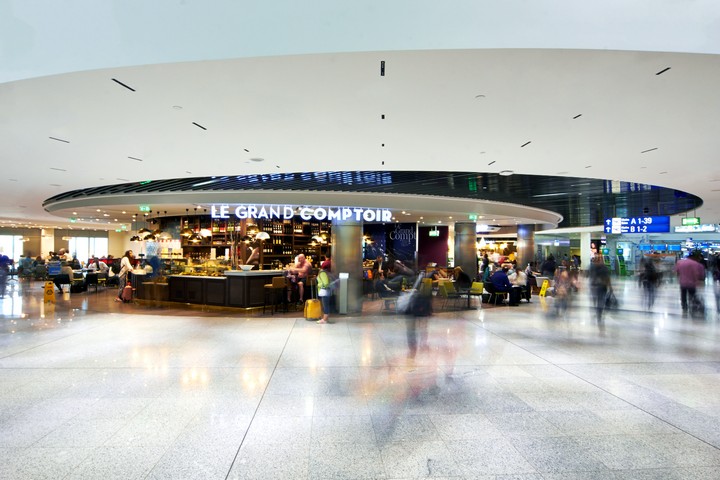 The last five years, marked by a series of significant changes and global developments in the aviation sector, and, in particular, by the deep Greek economy crisis, were, so far, the biggest challenges for the airport: AIA, demonstrating sound strategy and resilience, moved ahead from a negative 2011 to the Year of Records 2015, the most successful year for the airport’s passenger traffic, with 18.1 million passengers.

Yiannis Paraschis: The «synthesis» of the success 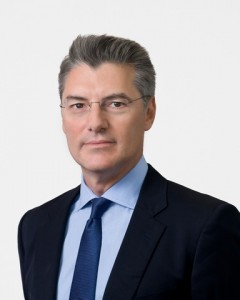 Athens International Airport CEO, Yiannis Paraschis is the brilliant mind behind Athens International Airport success, having demonstrated outstanding strategic thinking and innovative direction for its growth. Within the framework of the 2015 World Aviation Summit of CAPA, the leading provider of independent aviation market intelligence, analysis and data services, AIA’s CEO, was awarded in the new “Airport Chief Executive of the Year” category, which was established this year, being selected by the judging panel as the first CEO in the 13-year history of the CAPA excellence awards, “for his ability to thrive in an extremely difficult environment”, taking into account the remarkable strategic thinking demonstrated along with the introduction of innovative approaches that made a difference by offering new directions for others to take up.

The award to the Greek CEO is a very substantial distinction and acknowledgement of the remarkable achievements of Athens International Airport despite the challenging market conditions and the extremely difficult macroeconomic situation in Greece. This was achieved thanks to exemplary pioneering strategies implemented at Athens International Airport under the leadership of its CEO. Yiannis Paraschis has been AIA’s CEO since 2007, leading and expanding the airport through an extremely demanding period. Dr. Paraschis has also been active as board member of ACI World, serving as vice-chairman from 2009 to 2011 and chairman from 2011 to 2013.

Indicatively, certain of the innovative approaches adopted by Athens International Airport, making it one of the most distinguished and awarded airports internationally, are: commitment to IT&T innovation, keeping the highest level of services with continuous rise in productivity and reduction of operating costs, AIA’s high rating for its carbon footprint reduction strategies within the Airport Carbon Accreditation programe, the creation of the largest unified PV installation at an airport worldwide, and, last but not least, the leadership achieved by Athens Airport in the field of airport marketing across the years, thanks to its pioneering, dynamic airline support programmes and incentives schemes. As the judging panel noted, under the leadership of its CEO, Athens International Airport continued to record consistent growth in passenger numbers despite the deep crisis. This was achieved thanks to targeted initiatives and programmes to support traffic development and the airport’s airline partners to the benefit of the passengers.

On the occasion of his selection as “Airport Chief Executive of the Year”, Dr. Paraschis said:
“Dealing with significant challenges is never a one man show. This recognition belongs to the Athens International Airport and the total of 13,000 employees from 300 public and private sector operating entities, all members of the Athens airport community”.

Special actions for the anniversary year 2016

The actions and programmes for the anniversary year 2016 are focus on the society that is under strain, the city of Athens and its visitors.

For the year 2016: AIA cooperates with the Prolepsis Institute, in order to alleviate nutrition problems for children attending local public schools, continues to support the children and, on top of its scheduled actions, organized in May the first charity Plane Pull in Greece, at the airport area, jointly with the Association “The Smile of the Child”and DHL. Always supporting employment in Greece, Athens International Airport offers paid work for 100 young people in various airport company departments providing valuable training, knowledge and working experience.

For the promotion of Athens and the Athenian identity, the interactive campaign for the city “Speak Aθenian. Be an AΘenian.”  reveals the unique match of the city’s diverse attractive faces, its historical profile and distinctive modern character, through a creative synthesis of Greek and English words; additionally, the campaign’s activation within 2016 through a series of actions and initiatives at the airport and in the city, will be “telling the story of the live Athenian experience”!

AIA’s cultural programme “Fly Me to the Moon”, continues at the airport throughout 2016, with a series of surprise events for passengers 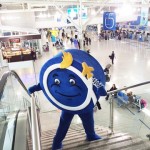 Finely the terminal staff has a new member… and a friend: “Philos the Athenian” (“Philos” means “friend” in Greek), the airport’s mascot, bringing extra smiles to the travelling experience!

Environmental protection has always been a priority, not only for AIA, but also for the numerous companies operating at the airport. AIA participates in a global industry initiative led by Airports Council International (ACI) Europe aimed at managing greenhouse gas emissions under the control of airport operators. AIA is currently accredited at Level 3 (Optimisation) of Airport Carbon Accreditation and has demonstrated a 42% reduction in CO2emissions under its direct control between 2005 and 2015. AIA’s 8.05 MWp Photovoltaic Park is the largest unified PV installation at an airport worldwide, developed on a 160,000 square metre area within the airport site.