You are at:Home»Articles»Interview with Chris Spirou: Free Agia Sophia!

Since 1821, when the Philiki Etaireia (Friendly Brotherhood) declared the first revolutionary movement, until the year 2018, when the United States-based “International Congregation of Agia Sophia” is fighting for the political liberation of the Great Church of Christianity, Agia Sophia in Constantinople, the Hellenism abroad is characterized by its decisive contribution to the evolution of the entire Greek world. 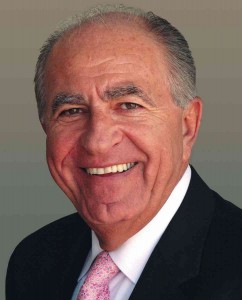 Just like it was then, there are now distinctive Greeks abroad, who carry on their shoulders the visions and hopes of the nation, with courage, with patriotism and with prudence. One of them, the Greek-American political leader, Mr. Chris Spirou, former Member of the Parliament, Chairman of the Democratic Party and President of the New Hampshire State House of the United States of America.

We met with Mr. Chris Spirou in Athens. We asked the man who envisioned the restoration of the Great Church of God’s Holy Wisdom in Constantinople, to talk to us about this important issue.

Mr. Chris Spirou told us: “The issue of the free operation of Agia Sophia, the church of the God’s Holy Wisdom in Constantinople, may be the most important religious event of the past six centuries. It is, however, at the same time very simple. Simple, because today, as it should be forever, no politician and no political regime has the right to identify the use of holy places and to appoint priests and hierarchs regardless of the religion. This also applies to the political leaders of Turkey and to the Turkish political system.

The International Congregation of Agia Sophia, its Board of Directors, its thousands members, and I personally, call for – we demand the obvious. We demand that Agia Sophia in Constantinople will function again, with the holy purpose that it was built, consecrated, and ministered for 1000 years. As a Functioning Church of the Christian Faith, and as the Symbol of the Orthodox Christian Church. We demand the re-establishment of Agia Sophia in Constantinople as the Sacred Prayer House for all Christians of the world. The International Congregation of Agia Sophia is an open organization, and its members are mostly Orthodox Christians, as well as Christians of other Churches.

Mr. Chris Spirou narrated to us the historical claim of the International Congregation of Agia Sophia.

“Today, more than 1,479 years after Agia Sophia’s consecration by the Patriarch of Constantinople, Minas, Agia Sophia, a place of worship, unique in beauty and religious devotion, is still standing as the most ancient Christian church under political occupation. It has been waiting for centuries now, for the faithful to return to its sacred place and to pray to their God, as Christian faithful did for 924 years, from 537 to AD to 1453 AD”. 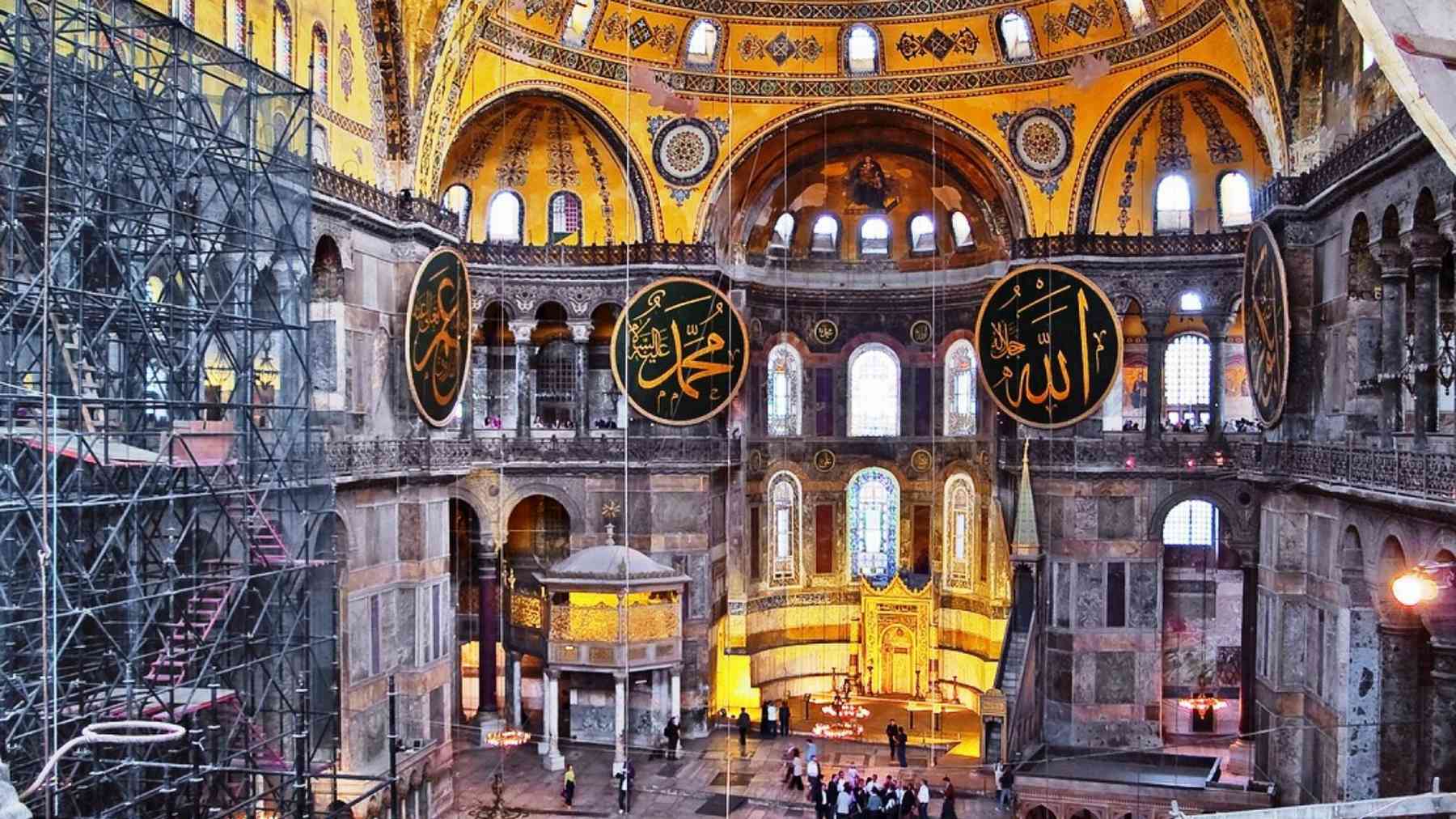 –Mr. Spirou what is the status today of the Holy Church God’s Holy Wisdom in Constantinople?

“As I said before, from 1453 to 1934, the Great Church of God’s Holy Wisdom served as a House of Prayer for the Ottoman Sultans and their official guest. From 1934, until the intervention of the International Congregation of Agia Sophia in 2007, the great Church of Christianity, the God’s Holy Wisdom, suffered the most devastating and degrading period of its history. 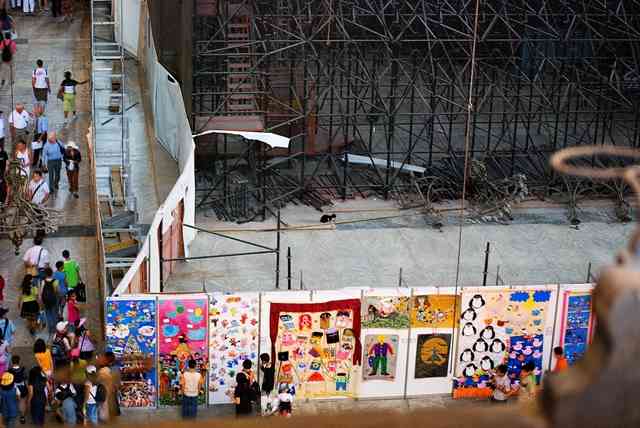 Holy icons were desecrated. Artifacts of unimaginable religious value were destroyed. Birds and animals were allowed to wander freely, inside the great Church of Agia Sophia. Turkey’s political leaders allowed cheap commercial bazaars and lewd fashion shows to take place in Agia Sophia. In the sacred temple, they exhibited household appliances including toiletries, and they sold cheap street art. Following the on-site photography and certification of the degrading acts within the holy spaces of the Agia Sophia, the International Congregation of Agia Sophia contacted in writing the political leadership of Turkey and the leaders of the great Religions. They forwarded them the photographic documents, demanding that proper respect be given to the Holy Church of Agia Sophia and that its spaces be cleaned.

Eventually, the Great Church of Agia Sophia was sufficiently cleaned, for the then Turkish Prime Minister Recep Tayyip Erdogan to accompany the President of the United States, Barack Obama, in Agia Sophia on April 7, 2009.” 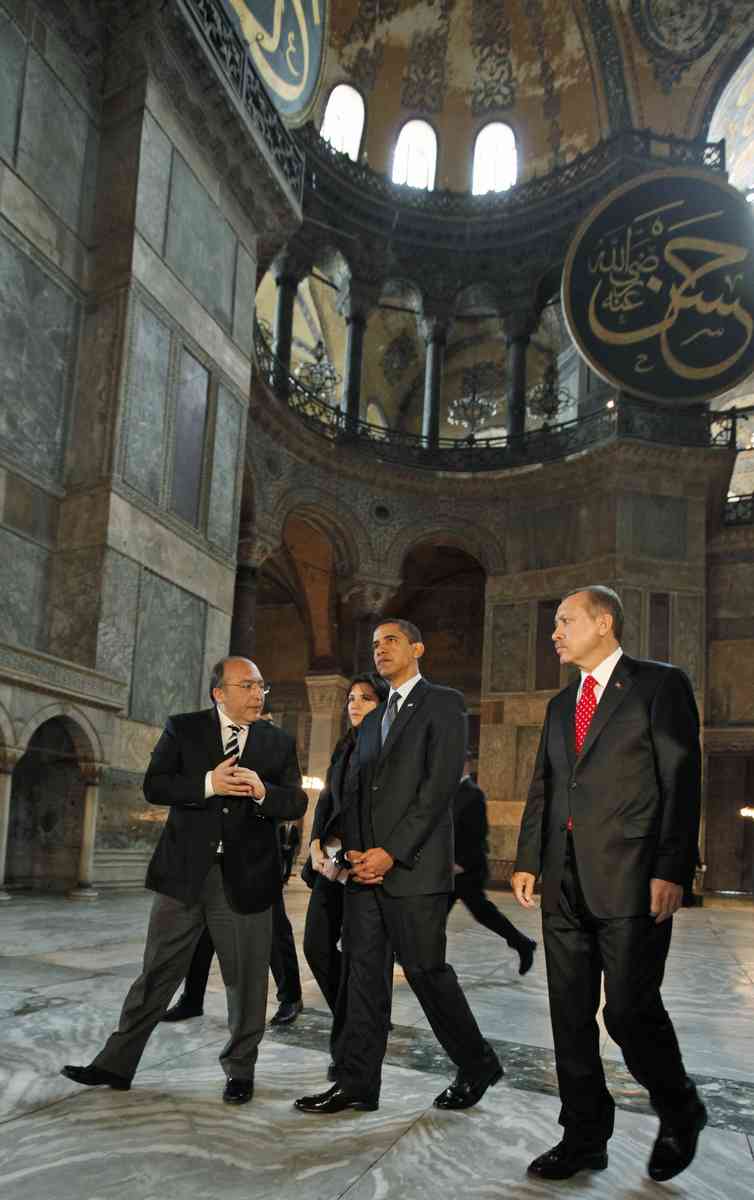 –Mr Spirou, there have been several attempts and threats by the Turkish authorities to turn the Church of God’s Holy Wisdom into a mosque. Is that possible?

“This is impossible! The Holy Church of Agia Sophia is a Christian church. Prophet Muhammad has explicitly forbidden Muslim believers or Muslim religious leaders to degrade or transform a Christian Church into something else. Muslims cannot even remove a candle from a Christian Church. If they do so, they violate the rules of the Prophet. Historically, there has never been a religious leader, of any religion, who has questioned the fact that the Great Church of Agia Sophia in Istanbul is a Christian temple. Never. No one.

Indeed, when in 2010, Ali Bardakoglu, the Head of the Religious Affairs of Turkey, was publicly asked, what Agia Sophia is, he officially replied. “Agia Sophia is a Christian church.

I remind you that when Pope Paul the 6th visited Constantinople in 1967, he asked the then Turkish government to visit Agia Sophia. When Pope Paul the 6th reached the middle of the Holy Church of Agia Sophia, the so-called Agia Sophia Museum, under the Magic Dome of the church, under the covert picture of God Almighty, at the point where in 1054 AD the schism of the Two Churches occurred, he knelt down and prayed with reverence. I do not believe that Pope Paul IV knelt and prayed in a Turkish tourist museum. Pope Paul IV knelt and prayed in a Christian holy temple. In the temple of the God’s Holy Wisdom. ”

–Mr. Spirou, what will be the next steps to fulfill your great dream and the mission of the International Congregation of Agia Sophia?

I firmly believe that Agia Sophia will soon function as a Christian Church and as the Symbol of the Orthodox Christian faith. The only reason that the Turkish authorities can put forward as an excuse for Agia Sophia not to function as a church of Christianity, as it was sanctified, is to say that no one has asked for it in the last 565 years! And our answer to this, is the following: Not only do we ask for it, but we also demand it!”